It started with curiosity: The name of the French philosopher seemed to pop up here and there, while we were working on dissertations and postdoc-projects. Not just, as we already knew, in the works of the French philosophers Gilles Deleuze, Bernard Stiegler and German media historians like Bernhard Siegert and Erich Hörl, but also in books and articles by John Durham Peters, Elisabeth Grosz and Yuk Hui. Simondon seemed to be relevant when discussing the question of technology in the Anthropocene, digging into neo-cybernetic trends within critical theory, understanding New Materialism and challenging AI-philosophy. What was it about this French philosopher that could inspire so many different thinkers and fields of thoughts?

We soon realized that we did not know very many people who had worked with the ideas of Simondon, and thus, set forth to produce some texts on him. With this issue, we do not intend to give a comprehensive introduction to Simondon’s philosophy. What we hope to do, is to offer a handful of reflections upon how to use Simondon today.

We do this by publishing an article on the politics of problems in the thinking of Simondon and Gilles Deleuze, written by Stefano Daechsel and a three-part interview on Simondon’s oeuvre with Yale-professors Gary Tomlinson, John Durham Peters and Paul North, conducted by Johan Fredrikzon. In addition, we have pieced together a few editorial texts: An overview of interesting articles and books on Simondon that we came across as we edited this volume, and a brief vocabulary of Simondonian thought.

The article and interview provide several answers to the question why Simondon is a relevant thinker today. Gary Tomlinson argues that Simondon offers key insights to evolutionary studies: He is able to bridge the gap between cultural and evolutionary biology. This is due to the Simondonian understanding of culture, Tomlinson argues, as something that arises in evolution and also shapes it. ”We were toolmakers before we were human”, as Tomlinson writes in the article ”Semiotic Epicycles and Emergent Thresholds in Human Evolution” (Glass-bead.org, 2017), which he quotes in the interview.

Furthermore, Simondon flirts with what John Durham Peters calls neo-Thomism, a view of the history of technology that is not transcendental, nor teleologically determined or based on an idea of progress, but that is nevertheless intelligible. As John Durham Peters says in his interview: ”Thomism gives you a potential of the world as an intelligible totality, much like James Joyce in Finnegan's Wake: a vision of the world as a knowable whole.” Simondon’s philosophy according to Durham Peters is ”Aristotelian in the sense that nature has a structure which in some ways corresponds to the structure of understanding (…), the processes by which nature works and the processes by which technology works are analogous”.

Most importantly, Simondon identifies possible strategies for resistance. Studying technology is necessary for us to act as political individuals, Stefano Daechsel argues in his article on Simondon and Deleuze. ”[T]here is an urgency to Simondon’s call for a technical culture that would foster a ‘genuine awareness of technical realities (…)’, such an awareness of technology ‘possesses political and social value’.” We need to delve into the technical realities, not in order to liberate ourselves from technology, but in order to modify and gain some kind of agency as technological beings. With reference to Robert de Niro’s character in Terry Gilliam’s film Brazil (1985), Paul North also reflects upon the agency of the individual through the figure of the tinkerer: ”The kind of freedom where you can do anything, like ex nihilo creation. Simondon wants nothing to do with that. It is the middle person, the one who can take an invention and actually make it into a form of life, bring it in line with the milieu and allow each to change the other, that is interesting for Simondon.”

Toward the end of the interview, North claims philosophy of technology today is looking for new resources in order to comprehend the world we live in. Mazzilli-Daechsel begins his article by stating that we need a way out of our politics of defeatism today. Simondon is a useful source to go to, in both regards. We hope this volume demonstrates that.

In addition to the section on Simondon, this issue of Sensorium Journal features two reviews, on the recent complete transcript of the Macy Conferences edited by Claus Pias and two books in the series “Understanding Media Ecology”. We hope you enjoy your reading! 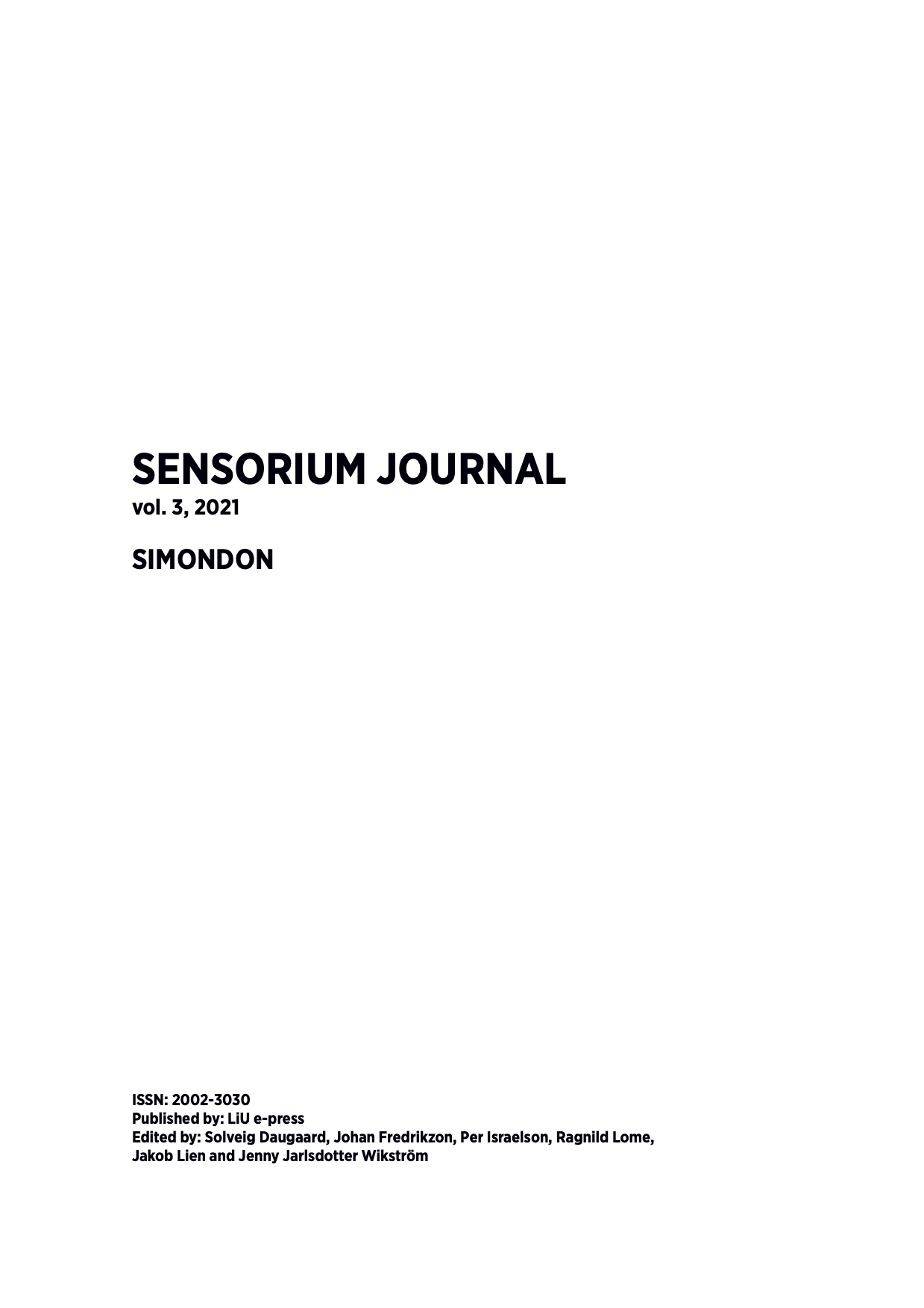